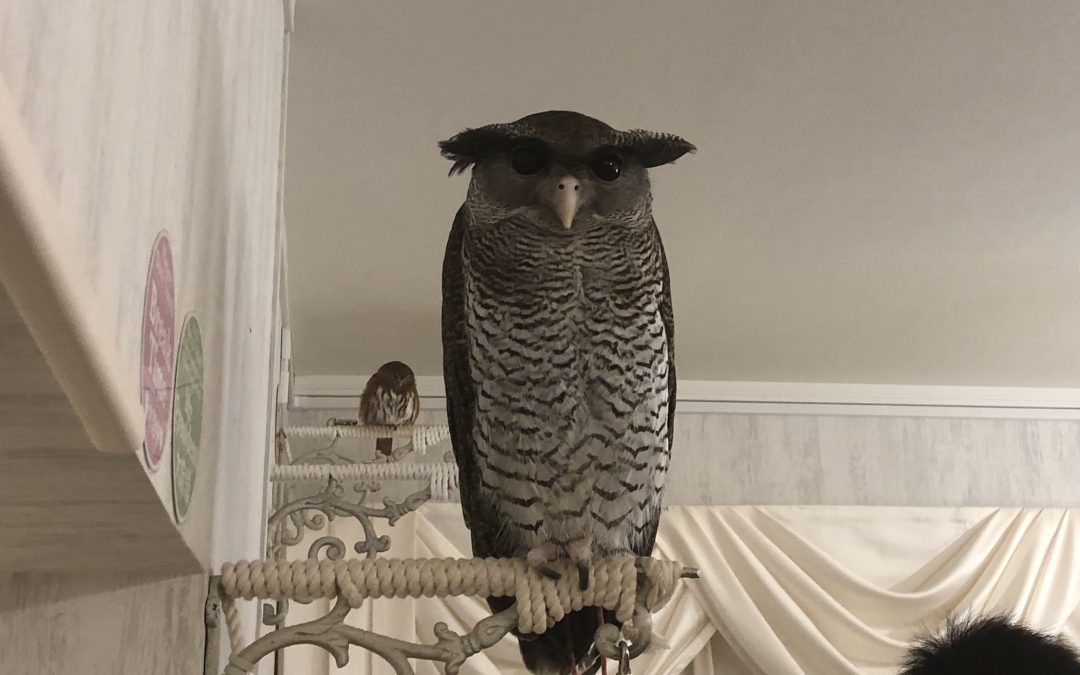 One thing that Japan’s become fairly famous for is animal cafes, cat cafes being the most common iteration. Basically, you get to hang out in a room with a bunch of animals and usually get some kind of snack. You may be able to consume your snack around the animals, you may be encouraged to have it later — it all depends on the cafe.

Now, things really started out with the cat cafe, and I’ve been to a few of those during my time in Japan. It can be really soothing to just hang out and have a snack while you play with kitties. That said, I wanted to branch out a little bit during this visit and see what else there was to see.

Unfortunately, as animal cafes become more popular in Japan, ones that aren’t exactly high quality are cropping up in greater frequency. I’ve seen cafes that look dirty and cramped inside, or that don’t seem to have particularly happy animals. I try to avoid establishments like that, especially if they don’t seem to have the animals’ welfare in mind.

One that I went to during this trip that really seemed to genuinely care about the animals’ health and happiness is Akiba Fukurou in Akihabara, Tokyo. It’s different from your typical cat cafe in a few key ways: you need to have a reservation and people are only allowed in small groups, there is no food or drink allowed, and best of all — they’re owls!

I was really impressed with the ambiance of this little owl cafe. It’s light and cheerful inside with a good thirty owls for you to hang out with. The owls themselves are cycled; they’re given days off and quiet breaks so they don’t get too overwhelmed. (If you go, make sure to look at the labels beside each owl — they’ll have their name and whether or not they’re on break.)

The first owl I made friends with was named Shirasu, or Whitebait. (It’s a type of tiny white fish.) I was asked which owl I’d like to hold and I pointed out this beautiful barn owl. Then I was really surprised when I was informed that Shirasu didn’t like to sit on arms, but was more of a shoulder kind of owl. I was a little wary at first (that’s just… really close to your face) but Shirasu was such a nice, friendly owl that we quickly got used to each other.

After a while, I finally got up the heart to wake Shirasu up and trade it in for another owl. This time I chose Risu (Squirrel), a very tiny little owl that made great faces. This one perched on my arm, but it was so small that I didn’t need a glove like some other owls there required.

The owls all had their own personalities; some were very friendly, some were very curious about all newcomers, some just wanted to sleep. I felt really lucky with the two owls I’d chosen, and it was just a really special experience. They say that the cafe is designed to be quiet, calm, and soothing and it really did deliver. Special care was taken not to alarm the owls and they were not caged. It really was such a cool thing to get to experience, and I won’t likely forget it any time soon.

A very different animal cafe that I went to, this time in Kyoto’s Teramachi area, was a little otter cafe. This one had a very different vibe than the owl cafe. No one here was sedate. Otters, I quickly discovered, are kind of like a caffeinated, sugared-up child who’d then been given cocaine. They are hyper.

The cafe itself had a lot of toys for the otters to play with (including an aquarium we could watch them swim around in) as well as a large enclosure where they were held together and could play with each other. They’d bring one or two otters out for guests to play with while the others stayed in their plexiglas room. We could watch them, but they had some degree of privacy. Still, this was a much smaller cafe than many (probably because so much room was dedicated to the otters’ enclosure and aquarium), so I wouldn’t go with large groups. Also? Watch your fingers, those little guys nip.

There’s something almost surreal about holding an otter, an animal I’ve only ever seen at zoos, at least until it starts squirming. There are a variety of toys you can use to play with them, and you’ll likely be given some treats to give them. (I’m reasonably sure it was cat food.) What was even cooler, though, was the babies.

Yes. They had baby otters.

These were held in a smaller enclosure (think like a playpen) because oh boy, they wanted to explore the entire universe. It was a lot of fun to get to hold them and bottle-feed them (as in a gerbil- water bottle, not a milk bottle) and they were about the cutest thing I’ve ever seen. Very, very difficult to photograph, as they literally never stopped moving, but so freaking cute.

While I generally enjoyed the experience, I think I’d recommend the owl cafe more readily than the otter one. Not only were the owls a lot less disposed towards nipping, but I felt like they had an appropriate amount of space. The amount of space the otters had wasn’t bad (and I’ve seen zoo enclosures not much bigger) and the otters didn’t seem unhappy, but I felt like they probably needed more space to move around and swim. They definitely had, y’know, toys, cat trees, jungle gyms, etc. to play with, but watching an otter do repeated laps in a small aquarium had me questioning whether it was an ideal environment. (Though, to be fair, I think it’s probably better than some other otter cafes in Japan and they were clearly doing their best. There isn’t a lot of space anywhere in major cities in Japan, even for people.) I’m not sure that I’m enough of an expert to really know for sure, though. This isn’t an anti-rec, just not a recommendation as wholehearted as the one for Akiba Fukurou.

If you’re interested in trying out an animal cafe in Japan, you have so many options. There are cat cafes, reptile cafes, owl cafes, just about any small animal you could think of. Just do some research first to make sure the cafes you frequent are right for you and kind to the animals.