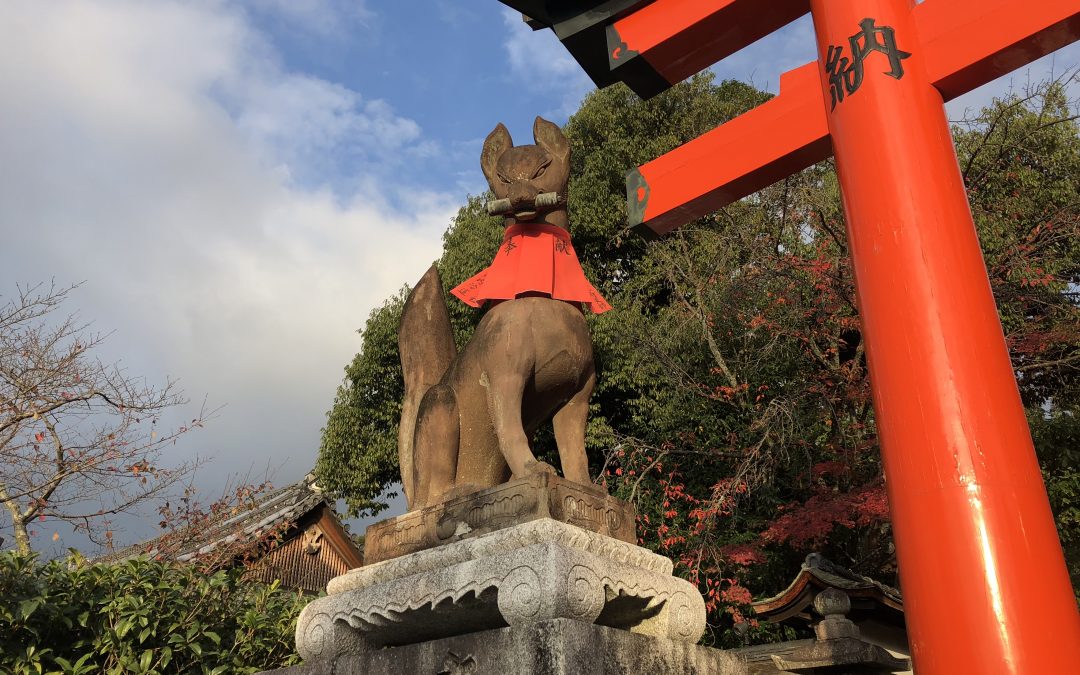 There are an awful lot of iconic shrines and temples in Japan, and one of the most visited, photographed, and talked about is Kyoto’s Fushimi Inari Taisha. You might have seen pictures before. Imagine a long, winding tunnel of bright red torii gates dotted with fox statues large and small.

Fushimi Inari Taisha, more than being one of the most picturesque Japanese shrines, is also an incredibly important one. It’s the headquarters for one of Japan’s most popular and celebrated deities, Inari. Inari is imagined in a lot of different ways in Japanese religion and has a gender that’s… well, complicated. (Let’s just go with “they”.) Inari is associated with rice in Japan, which is tied almost inextricably to business and prosperity — which makes them a very popular deity. Inari is generally considered to have a human form, but is represented most often in the form of magical white foxes (kitsune) that serve as their messengers.

These foxes dominate the landscape in Fushimi Inari Taisha. You’ll see forbidding stone fox statues throughout the shrine complex, often carrying rice or keys (to the granary), but you’ll also see lots of tiny porcelain statues as well, especially on altars. Even the ema at this shrine are fox-shaped.

The shrine buildings themselves are very beautiful, but it’s not the temple itself that’s famous — it’s its gates. Almost all Shinto shrines will have large red torii gates, though you’ll sometimes see ones made of stone or unpainted wood. These gates serve as a visible boundary between the world of deities/spirits (or kami) and that of humans. Some people still keep to traditional rules about these gates, especially bowing before entry and keeping to the sides when passing through them. (The center is reserved for the kami.)

Most shrines only have torii around entrances; like I said, these gates denote a sort of liminal space between worlds, so it makes sense that they would act as doors. There might be a large torii at the main entrance(s) of the shrine complex, then smaller torii throughout when it comes to smaller altars and sub-shrines. There’s a theme, though, and that’s usually “transition”.

Fushimi Inari Taisha is different. It has its typical torii at its entrances, but it also has something called the senbon torii, or the thousand torii. Once you’ve passed through the main shrine areas, you’ll find a path that winds its way up Inari’s mountain (also named Inari), and that path is lined with hundreds and hundreds of torii.

The effect of this is really pretty incredible, especially when the light is slanting through the trees and torii to fall just so on the path in front of you. It’s no wonder that you’ll be spending most of your hike dodging selfies.

While the effect itself feels pretty magical, the torii themselves are less so. Many tourists wonder at the writing on the back of the torii gates. Are they dedications? Incantations? No, my friend, those are advertisements. Each torii in the senbon torii has been donated by a local business. It’s one part request to Inari for prosperity and one part billboard, frankly speaking, and while it feels a little cynical once you realize what they are, it’s also a donation befitting a deity that watches over business dealings.

The climb itself has different levels of difficulty. Most people will be able to handle at least some of it. It starts out relatively level (for a shrine complex, anyway) until you get to a small shrine part of the way up what has been (up until this point) basically a hill. After this little way station, though, the climb becomes much steeper and eventually starts to include stairs and becomes more of an actual hike. Many visitors turn back at this point, so while the walk gets more difficult after this area, it also empties out quite a bit. If you want to get a good picture of the torii sans tourists, that’s probably your best bet. Most of the remainder of tourists turn back at an intersection about halfway up the mountain (as this is where the torii start to peter out), but you’re welcome to go all the way up if you choose.

There are small shrines sprinkled around the mountain paths, culminating in a shrine to Inari up near the peak. No matter how far you go, the walk is enjoyable. (Even if you might have to deal with some pedestrian traffic.) The area becomes more and more heavily wooded, and the quiet walk is soothing. Add to that all the little shrines and altars and you’ve got yourself a beautiful walk.

Outside of the torii, there is still quite a bit to enjoy around the shrine grounds. There are a number of very beautiful buildings near the front of the shrine and a little cafe that provides a lovely view of the scenery. If you’re into something a little more casual, there are dozens of stalls selling souvenirs and snacks on the street leading up to the shrine itself. In this area, you’ll find all sorts of different kinds of snacks and meals, but maybe you should try a treat associated with Inari, like inarizushi (rice wrapped in sweet fried tofu pockets) or kitsune udon (udon soup with savory fried tofu soaking up the broth).

Despite the very touristy feel of the area, it’s important to keep in mind that it’s still one of the most important shrines in Japan on a religious, cultural, historical, and political level. It has been historically included in Japan’s top rank of shrines and the shrine itself is almost 1300 years old. (Many of its buildings date to the fifteenth century, though.) It’s not shocking that along with the shops selling fox coin purses and sweet dango, you’ll also find shops selling religious objects for home use. You should keep a certain amount of respect as you climb Inari’s mountain paths, even if you spend half your time dodging selfie sticks.

In my personal opinion, Fushimi Inari Taisha is one of the most rewarding shrine visits you can make in Kyoto, particularly if you hike up a little further than the tour groups. It’s very popular, but it’s pretty easy to see why. You quickly feel like you’re in an entirely different world, ringed as you are with red, and you really half-expect to see foxes darting around in the forest out of the corner of your eye. The walk itself is beautiful, especially when you encounter some of the smaller shrines along the path, and there’s a real sense of nature that’s lost in some of the main shrines in larger cities. That said, it’s not nearly as difficult a climb as some sacred mountains in Japan and it’s very approachable to cultural laypeople and inexperienced hikers. Fully, fully recommended.