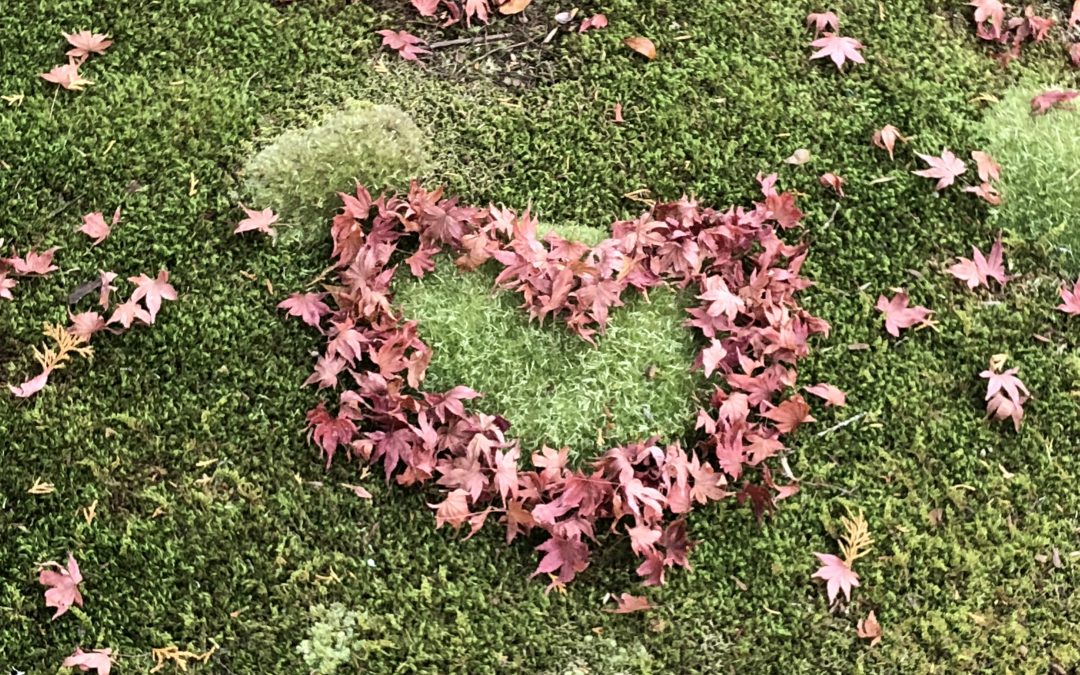 So Saihoji, also known as Kokedera (Moss Temple), is a very famous temple in Kyoto. It started life as one of Kyoto’s first dry landscape gardens (i.e. rock gardens), and, like many dry gardens, moss was employed as an accent. However, the moss overtook the entire garden, and these days, there are hundreds of varieties of moss on display on the temple grounds.

Because this moss is very delicate (and in the case of some species, endangered) Kokedera severely limits the number of people who can visit. Not only do you need a reservation to visit (which can only be procured by mail), but you will be required to undergo a sutra-copying session before you are allowed to enter the gardens. Add to all that an expensive entrance fee (for a temple, anyway) and it definitely weeds out the casual visitor.

As it turns out, though, I’m not exactly a casual visitor. I studied in Kyoto in college with a focus on Japanese religions, and I’ve always wanted to visit Kokedera. Sutra copying? No big deal, it wouldn’t be my first time. Archaic reservation system? I’d figure it out! This would be fine!

(Uhhhh thank you to a friend of mine living in Japan for mailing the darn thing for me once I finally realized it was not and was impossible to send from my local post office.)

In the end, after convincing my father that it’d be worth it and figuring out the reservations, I got us a time in the afternoon in mid-November. We ended up arriving far too early for our appointment, so we decided to walk around the surrounding area.

Kokedera is situated just south of the insanely crowded Arashiyama area, but was surprisingly quiet and mostly residential. There weren’t many buses that went out there. That’s why we were surprised to see a small temple not far from Kokedera with a line going out to the street.

So, being us, we promptly got in line. I did some asking around (and then some googling) and found out that we were at Suzumushidera, yet another nicknamed temple. Its real name is Kegonji, but even the stone sign out front just said Suzumushidera — which instantly drew me in. I know the kanji for “insect” when I see it.

Suzumushidera is known as the Cricket Temple. Like Kokedera, it’s a lot more involved than just wandering in, looking around, and maybe buying a charm or two. The line started moving all at once, and we realized that we were in line for an event, not just entry to the grounds. When we got to the top of the stairs, a nervous attendant told us that it was time for the temple’s daily service, and while we were more than welcome to attend, it was entirely in Japanese.

I was immediately like THAT’S FINE, and my father, bless him, just kind of went along for the ride. (Unlike me, he doesn’t speak a word of Japanese.) I’d never been to a lecture at a Buddhist temple before, and I was pretty psyched. The monk who came out to talk to us as we drank our tea and nibbled on sweets was extremely gregarious, personable, and fast-talking. I got the main gist of what he was saying (between jokes, it was largely explanations about how to pray at the temple properly) but my poor father. He just drank his tea and stared, wide-eyed. Thanks for being a good sport, Dad.

After the service, though, we got to do something that we both enjoyed. Now, part of what the monk had talked about was the crickets. Apparently, a monk who’d been at this temple in the past had loved bell crickets, thinking that they embodied Buddhist ideals through their song. That’s why they have a room that’s nothing but hundreds of crickets in little aquariums. It’s so loud and I loved it. It was really a one-of-a-kind experience.

(Note: many temples in Japan don’t allow photography inside the main halls, and we abided by this at Suzumushidera.)

On the way out, we stopped to pray at their Jizo statue, who’s said to grant supplicants one wish, and then headed back to Kokedera.

By this point, it was about time for our appointment. We went inside, I dropped off my goshuinchō, and we were led to our worktables. My father sat outside with a few other western tourists and elderly folks who’d have a hard time sitting on the floor inside. He also got an ink pen, apparently. Inside, I was seated at a low table in a long row of people (it took some finagling to find room for my cane), given a brush and ink stone and then given my sutra to copy.

Now, it’s not hard. It’s really preprinted on the paper they give you; you just have to go over it in ink. Dad finished long before I did, a fact helped by the fact that he had a pen. I’d only used an ink brush and stone once before in my life, and that wasn’t for detail work. It uh. It was a learning curve. That said, I was seated between a man with the messiest handwriting in the world and a man who honestly might’ve been a professional. So I was kind of like the average between the two.

After about a half hour of copying, I turned my sheet in and picked up my book. I handed over my book at every temple and shrine I mention on this blog, but I’m specifically talking about it here because look at the I received.

After all that clerical work, we were finally allowed into the garden. And oh boy, it is beautiful out there. There are some really uneven steps, unfortunately, so dad had to help me through the garden, but it was truly beautiful. I’m sad to say that my camera just could not capture the vividness of the colors in the garden; the weather turned just as we went outside and it was difficult to get the lighting right. Still, I hope my photos give you the barest idea of how lovely it really was. (And if you’d like to see professional-grade photos, the temple has a very nice website.)

You are not under any circumstances allowed to touch the moss, and I need to tell you: that was freaking hard. It looked so soft! I’ve never seen so many colors and textures of moss in my life and I really, really wanted to touch it. It was so touchable! Still. I did not. You can thank me later, future generations.

Kokedera and Suzumushidera may not be the two most accessible temples in the world (and I mean that as in disability and also just in general), but they offer experiences that are really special.