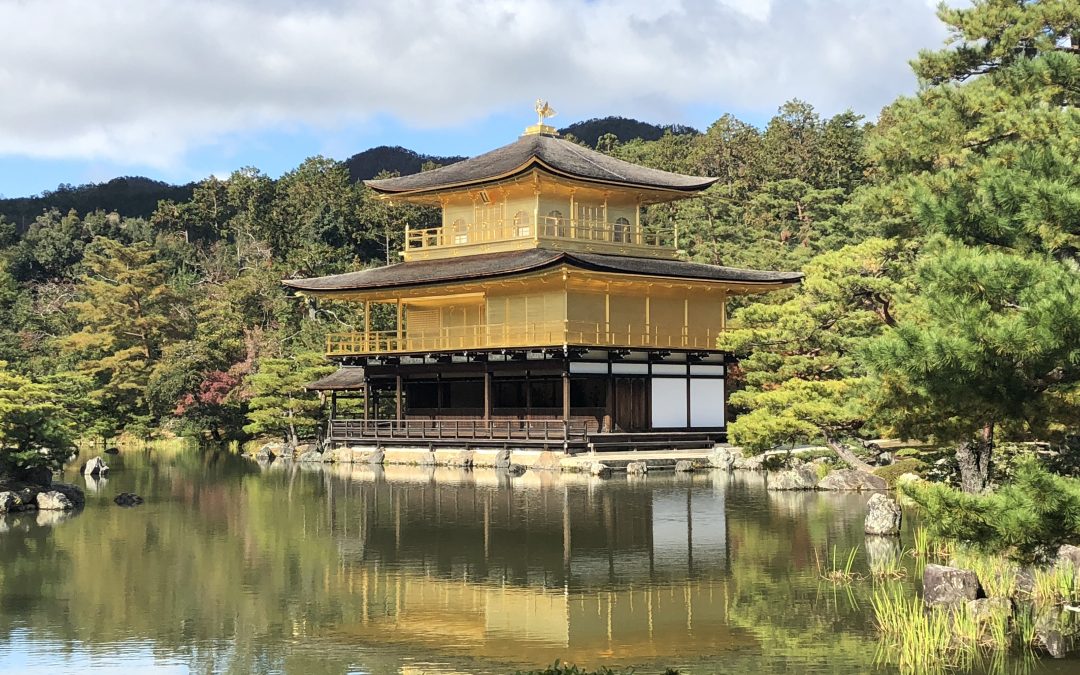 A little east of Kyoto’s Arashiyama area, you’ll find two very famous temples that are within walking distance of one another, Kinkakuji and Ryōanji. Truthfully speaking, the two temples couldn’t be more different from each other; the only thing they seem to have in common is the crowds. Kinkakuji, or the Golden Pavilion, is one of Kyoto’s flashiest temples, an absolute must on a sunny day, and Ryōanji is a much more sedate temple whose fame is based on a sparse landscape and its use in meditation.

We hit up these two temples back to back due to their proximity to one another, but it was also pretty fun to see two such different religious sites one after the other. We started out with Kinkakuji, then took the bus to Ryōanji. (It’s only like two stops; it’s extremely walkable if that’s your preference.)

Now, Kinkakuji didn’t start out its life as a temple, and that really, really shows. Kinkakuji (not to be confused with Higashiyama’s Ginkakuji) was once the villa of a Muromachi-era shogun, Ashikaga Yoshimitsu, and the wealth and power of its original owner show in its design. The pavilion itself is almost entirely coated in gold, which makes it a really magnificent sight on a sunny day, and the grounds are lovely. After Yoshimitsu’s death, the villa was dedicated as a Zen Buddhist temple, as he’d directed.

Kinkakuji, like most famous temples in Kyoto, was burned down a few times. The pavilion itself survived the Ōnin War, miraculously enough, only to be burned down by a monk struggling with mental illness in the 1950s. The reconstructed pavilion is incredibly beautiful, as are the grounds.

Kinkakuji has a certain allure in all seasons, but my favorite time of year to see it is autumn. The gleam of the golden pavilion against fiery red leaves is absolutely breathtaking. You’ll have to fight the crowds for that perfect photo, but it’s worth the effort.

Once you’ve seen that first spectacular view of the temple reflected against the water, you can meander your way around the lake (be on the lookout for koi!) and look at the other buildings in the complex. The path is one-way to help accommodate the crowds, so be careful to take all the photos you want on your first pass. You won’t be allowed to go backward.

Once the pavilion itself is out of sight, you’ll still be able to see Kinkakuji’s lovely gardens. It’s a little bit of a hike up some very old steps, but it’s a really nice view. As you round out your little tour, you’ll get a chance to get your book stamped, get omamori, and maybe even get a snack or a souvenir.

The whole situation is drenched in wealth and materialism, I won’t lie to you. In some ways, that feels sort of antithetical to the tenets of Zen Buddhism, but Buddhism’s a complicated subject in Japan and is often expressed in a lot of different ways.

To have an experience that’s more “traditional”, if still deeply touristy at this point, you can walk on over to Ryōanji. Ryōanji is a much quieter temple (unless you’re unlucky enough to run into a school or tour group) and the emphasis is on Zen meditation.

Ryōanji has one of the most famous Zen rock gardens (aka karesansui, or dry landscape gardens) in the world, and it is raked every morning by the monks that work there. It is both the garden’s layout and the actual act of raking that are supposed to lead to enlightenment. The repetitive nature of raking is intended to free the mind and disperse conscious thought, and while tourists aren’t going to experience that at Ryōanji, you’re still allowed to engage in the other kind of meditation: mindful sitting.

Ryōanji is most well known for its small rock garden that contains fifteen large rocks resting in a sea of tiny pebbles. It’s said that you can never see all of the large rocks at once from any angle on the viewing platform, and their placement is often likened to a mother tiger and her cubs crossing a river.

It is admittedly soothing to sit and consider the rocks, as long as the tourists around you are well behaved. I was surprised that even my father, who tends to be kind of hyperactive, seemed to enjoy just sitting there silently contemplating the garden. You’ll need to remove your shoes to gain access to the garden, so if you ever go, make sure you wear nice socks.

The creator of Ryōanji’s famed rock garden is actually unknown. The official party line is that Sōami, a famous artisan of the time, designed it, but modern scholars doubt that claim. After all, a lot of things were retroactively credited to Sōami. It doesn’t help that the temple has gone through multiple fires and refurbishments, and the records aren’t always very thorough. There are a lot of theories about the true creator, each more interesting that the last, so if that’s something that interests you, I really recommend doing some digging of your own.

If that’s not a thing you’re concerned with, though, taking an hour to sit down on Ryōanji’s wooden porch and let your mind wander can be a relaxing pastime, especially if you go during an off period when you won’t have to deal with lines for a seat or loud tourists.

After you’ve taken your turn contemplating existence, you can walk around Ryōanji’s grounds. A lot of tourists just take their shoes off, look at the rocks, then head back out. But the grounds that the rock garden is a part of are beautiful in their own right, and I really recommend going for a walk and taking in the sights.

Despite its fame, Ryōanji is not actually my favorite dry landscape garden in Japan (I’m not sure it’s even in my top three), but it’s a site of serious cultural significance. I wouldn’t set aside a whole day to walk around the temple complex, but it’s definitely worth a stop if you’re in that part of Kyoto.

Both Kinkakuji and Ryōanji are considered must-sees in Kyoto. I agree with that assessment — Kinkakuji is visually spectacular, and from a cultural and historical standpoint, Ryōanji is extremely important — but it’s with the caveat that, well, both of them are must-sees. Everyone else will be seeing them as well. So I recommend going to see both of these unusual temples, but perhaps picking an off time, such as early morning or evening on a weekday or during the winter. It’ll be a much more enjoyable experience for you if you’re not packed in like a sardine. Save those for dinner.