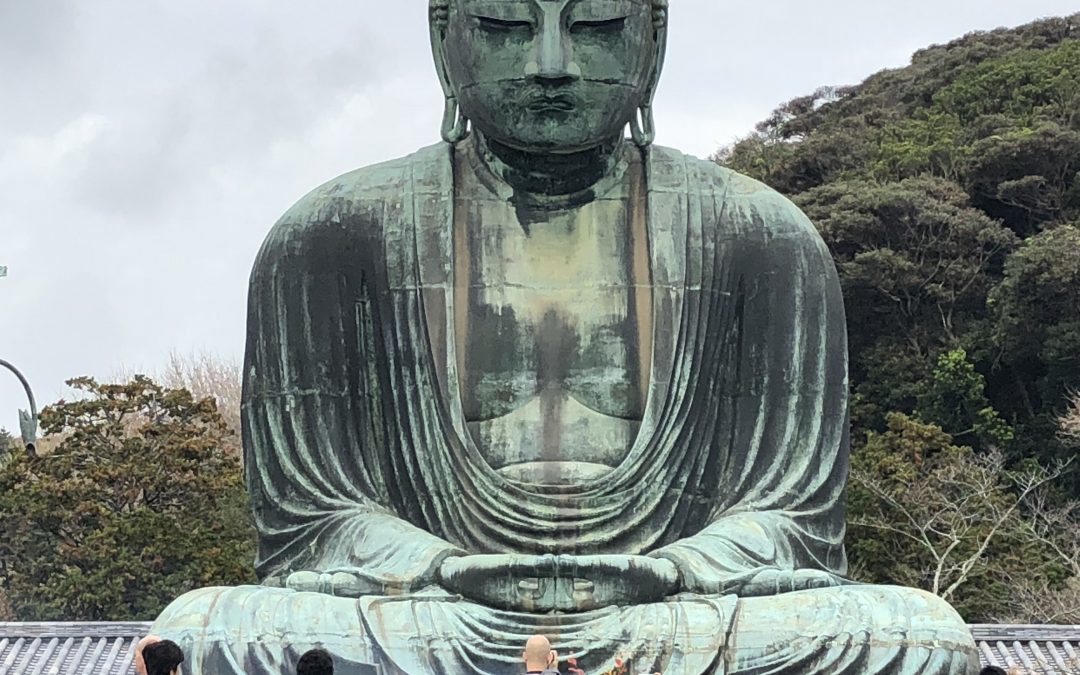 Kamakura is a city about 50 km from Tokyo and was the location of the nation’s capital during the Kamakura period, or around 1185-1333 CE. These days, it’s most famous for its daibutsu, or great Buddha statue. Daibutsu are fairly common throughout Japan, but the one in Kamakura is one of the most famous. It’s almost 800 years old and is an iconic sight in Japan.

My mother actually made a special request to come out to Kamakura and see this daibutsu. Her father had visited Japan before she was born, and she’d grown up with slides from his travels. My grandfather recently passed away, and I think she really wanted to feel closer to him by visiting the places he’d been. (We still have his walking stick from Mt. Fuji hanging up in our house.) She vaguely remembered seeing a huge Buddha statue in his slides — seated, outdoor. And I figured this was our best bet.

So we all set out on the train to Kamakura to go to Kotokuin, the home of Kamakura’s famous daibutsu. It’s not hard to find once you get to the train station. There are signs all over the city pointing to this single temple, and there were crowds to match. That said, it really is an overwhelming site. We spent a long, long time just sitting on the bench and watching him. There’s such a gentle feeling suffusing the statue, even with the crowds. It’s a definite must-visit.

After visiting Kotokuin, my mother went off to find a knitting store and my father and I decided to walk to Hasedera. I didn’t know an awful lot about Hasedera, but I’d heard it was a really neat place to visit.

Y’all. I’m here to tell you. Nothing against the daibutsu, but Hasedera is freaking amazing and if you go to Kamakura, you have got to hit that place up — and leave quite a bit of time to visit it. The grounds themselves are beautiful, but there’s also a museum, a cave, and an absolutely incredible golden Kannon statue that, quite frankly, took my breath away. (Kannon is one of the most popular and prominent bodhisattvas that you’ll find in Japan. She is the goddess of mercy, and the Japanese version of the Chinese Guanyin.)

Hasedera isn’t that far away from Kotokuin, but it was just long enough to walk past a bunch of snack stands that of course we had to test out. I got myself a purple sweet potato croquette and yes, please.

Once we got there, I dropped off my stamp book and then we started taking a look around. There are quite a few smaller temples and neat statues around the complex, but I’m going to focus on a few of the places that I loved most.

First of all, the cave. THE CAVE. There is a small cave on the grounds that’s dedicated to Benzaiten, the Buddhist goddess of music, beauty, wealth, and wisdom. (She is in fact the Japanese import of the Hindu goddess Sarasvati.) She can usually be identified by the biwa (a type of Japanese lute) that she holds. The cave at Hasedera has statues of Benzaiten and her attendants carved into the walls, and as you venture deeper into the cave, has multiple altars and statues dedicated to the goddess. It is just so, so beautiful inside. I could have stayed there for hours.

Unfortunately, the museum was closing shortly and we had a lot of stairs to climb to get to it. The museum itself features a human-sized golden statue of Kannon as well as statues of her thirty-three avatars. There are also several ancient artifacts such as the old temple bell and assorted kakebotoke (hanging plaques). It’s a small but lovely little museum and I thoroughly enjoyed it.

Next to the museum, though. Next to it! I’d heard about a Kannon statue at Hasedera, and while the one inside the museum was very nice, I’ll admit to being a little disappointed. I was so wrong. We walked out of the museum and into an adjacent room with one of the most beautiful statues I’d ever seen. The golden Kannon is enormous, 9.18 m (30.1 feet) tall, and splendidly regal. I did not take pictures in the museum or of the golden Kannon itself as we were instructed not to out of respect. That said, I’m sure you can find photos if you look — and I’m sure they won’t do the magnitude of it the least little bit of justice. It was yet another part of Hasedera that I could have spent an hour in, just staring.

Outside of the museum area, there’s a viewing/picnic area that has a gorgeous view of Kamakura. After sitting down and taking a break after going up all those stairs (a mad dash that my body did not thank me for later), and after exploring the statues in this area, we started back down.

The light started to get bad as we made our way back down, but there’s one more part of Hasedera I’d really love to talk about. There’s a stunning little section of the temple complex dedicated to the bodhisattva Jizo in his role as guide to deceased children. There is a ritual known as mizuko kuyo in Japan that’s sometimes undertaken after an infant dies. (Stillbirths, miscarriages, and abortions are included in this; it’s a somewhat controversial practice for many reasons.) One of the reasons why Jizo is so popular is that he watches over children, particularly as they navigate the afterlife. He’s said to hide children under his robes and secret them across the riverbanks of the dead. That’s why you will find thousands of tiny Jizo statues in this little garden at Hasedera. These are statues used in mizuko kuyo, and as such, the area should be treated with respect. Regardless of one’s personal feelings about the rite, these statues are proof of an awful lot of grief and terrible human experiences. It’s not unlike a graveyard.

Still, there are joyful Jizo to be found on Hasedera’s grounds as well. The happy Nagomi Jizo greets guests as they arrive, and we passed Ryoen Jizo  on our way out. Jizo, like all of us, contains multitudes.

After we left Hasedera, we got dinner near the train station before heading back to Tokyo.

All in all, Kamakura is a perfectly lovely day trip, and you could easily spend several days there exploring the temples and beaches there. We had a really nice day!