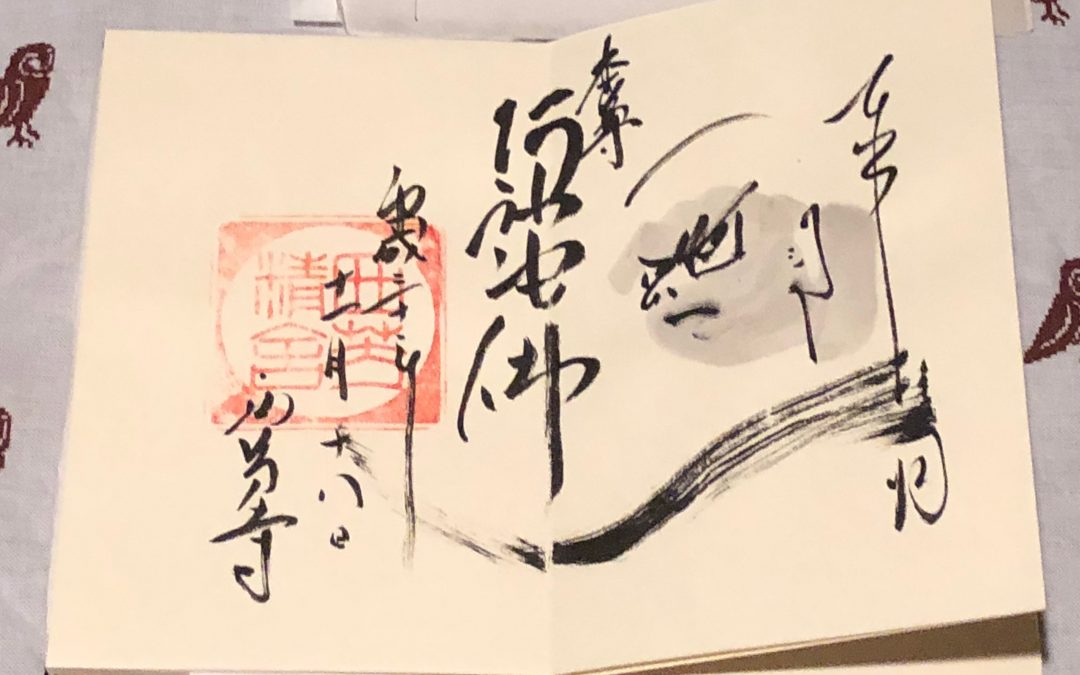 Japan, for all its beauty, history, and fun little quirks, is not an inexpensive country. Travelers have long sought out souvenirs from their trip that wouldn’t break the bank, and an unlikely contender has appeared. A relatively cheap and interesting souvenir that’s become very popular in recent years is the goshuinchō, or stamp/seal book. Originally reserved for the devout, goshuinchō have been enjoying widespread popularity, and these days, you’ll probably have a bit of a line for your stamp.

Goshuin (or ), to put it simply, are special stamps that you get at temples and shrines in Japan. The goshuinchō is the book that you keep these stamps in. “Stamp” is a little bit of a misnomer, though. What actually happens is that you take your book to the goshuinchō office at the temple/shrine and the clergy working there will sign and stamp your book. Elaborate calligraphy is used as they write information such as the name of the temple and the date of your visit, and then location-specific stamps are stamped over the writing. Most shrines and temples will perform this service for you for about 200-500 yen. In other words, your goshuinchō may add up in value, but on an individual basis, it’s a neat and inexpensive way to remember your trip.

Goshuin started out hundreds of years ago as a way to track a pilgrimage. There are many set pilgrimages in Buddhism and Shinto — in other words, you go on a journey to specific temples and/or shrines as a religious ritual. This was popular amongst religious clergy, but also individuals who wanted to find enlightenment or perhaps cure an illness. It doesn’t hurt that religious pilgrimage was one of the only allowed forms of travel during certain eras of Japanese history. These travelers would carry these books with them and get them stamped at each location they visited as proof of their pilgrimage.

Personally speaking, I’m a religious studies scholar, so my goshuinchō are a little more pilgrimage than souvenir. I visited an awful lot of temples and shrines while in Japan, and I had fun getting my books signed wherever we went.

The books themselves range from simple to ornate and can usually be purchased at any shrine or temple that also has a stamping office. (This will be almost all temples and most permanently-manned shrines.) They’re so fun to look at that there are some people who just collect the books and don’t bother filling them with stamps.

A lot of people keep separate books for Shinto shrines and Buddhist temples, but it’s not strictly necessary. (And once I accidentally handed the wrong book to the at a shrine and so my temple book does have one shrine stamp in it. It’s not a huge deal.) As long as you have a dedicated book for , you pay the fee, and you have it opened to the page you want , they’re happy to do it for you.

Some locations will have special paper that can be signed and tucked into your goshuinchō later, but they most likely will not sign sketchbooks, notebooks, etc. that are not specifically designed for the task. It’s important to keep in mind that, though have become a popular souvenir, it’s still a religious rite. You should be respectful towards your books; to some people, they’re still considered holy.

Whether you’re a pilgrim, a tourist, a collector, or you just like watching them do calligraphy, goshuinchō is a fun activity in Japan if you plan on visiting temples and/or shrines. If you’d like to start your own book, you just have to look for a sign (look for “seal/stamp book”, “”, “shuin”, 御朱印, or 朱印), buy a book, and take it to the window. You may have to wait in line if there are a lot of people, and sometimes they might even give you a number and ask you to come back later. It’s a lot easier than it sounds, though, and a very rewarding memory to take home with you from Japan.